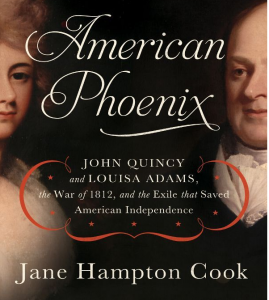 America fought not just one war for independence; it fought two.  The War of 1812 threatened to be the downfall of our fledgling nation, but John Quincy Adams and his wife, Louisa, were instrumental in raising her up from the ashes.

Although the author used simile and metaphor much too much, I still enjoyed the journey through the Adams’s correspondence and diaries.  Some of the important points of diplomacy and treaties were witnessed by John Q. Adams.  The peace treaty between France & Austria after Napoleon’s war was announced at a diplomatic dinner he attended in Russia.  This was the perspective he had.  There were extraordinary and historic experiences in St. Petersburg.   Who of us wouldn’t be awed at meeting with the royalty of the old Russian Empire?  Securing good trade relations via the most magnificent  court in all of Europe and Asia was his task.  Adams was successful with Alexander just as his father had been with Peter the Great.  America was accepted by Russia as a legitimate independent country with good trade relations, a distinct advantage when England was stubbornly trying to bring the whole world to heel.  Both Adams and his “Eve” loathed the pomp and costumes of the courts which were so foreign to Americans.  Both would rather have been home, but they played the part and won the friendship of one of the most powerful nations in the world.

These were the days of Napoleon’s rule.  He was descending from a triumphant general to an avaricious emperor.  His policies and greed were beginning to take a toll, not only on France but all of Europe including the great Imperial Russia and British empire….trickling all the way to the fledgling country, America.  “Times were changing.  Something dark hovered over the horizon.  What it was Adams did not yet know” (Pg 220).

Louisa is described as the American Jane Austin. One who often was obliged to play her role as a diplomat’s wife, a politician’s wife, a president’s wife…yet privately yearning for the simplicity of a quiet life with her loving husband and children.  She despised the pretentiousness of political intrigue, but at the same time understood the weighty importance of it for their young nation. Interestingly, Louisa was the only other American First Lady besides Melania Trump who was born outside of the US and became a naturalized citizen.  She was an extraordinary woman!

“Faith fortified Louisa’s soul throughout her life. The woman who had wanted to die after the loss of her baby in 1812 [and several other miscarriages] overcame dark depression and a harrowing solo journey across Europe so that she could live life to the fullest, relying on her Maker to determine her final breath:

‘And when it is His will that I lay me down to sleep; that sleep, from which we wake no more in this world; may I die in my Savior Jesus Christ; in the full hope of those divine promises, which lead the purified soul to heaven for evermore’— L. C. Adams, 27th June 1836.1

I couldn’t help but think of the nature of an ambassador’s work.  It remind me of our duty as Ambassadors for Christ (2 Cor. 5:20).  We long for the Homeland, and seek to protect and advocate for its citizens.  We know what it is to endure hardship and ill treatment, to be out of step and foreign to everything around you, a curiosity and object of derision easily taken for granted or taken advantage of.  Not all of America’s ambassadors were as successful nor had good reputations.  Ambassador and General John Armstrong, minister to France, for instance, whose insults and impropriety and selfishness hurt the cause of his nation and was sidelined to make way for a more qualified Adams who only had his country’s interests at heart.

Public service was more important to John Quincy Adams than anything else. His purpose in life, his very existence, was to be useful to mankind. His success in Russia and his role in securing the Treaty of Ghent qualified him to become secretary of state in the administration of President James Monroe. He was the mind behind the Monroe Doctrine, which boldly proclaimed the end of Europe’s claims to the New World.2

Among John’s finest presidential accomplishments were trade treaties. He was responsible for adding more commerce treaties to the United States than any other president prior to the Civil War. His trade treaties included those with Denmark, Norway, Sweden, the Hanseatic cities, Austria, and Brazil, among other countries. Adams is the only US president who resurrected a dead political career by way of a diplomatic post to Russia. John’s honorable exile, as Ezekiel Bacon termed it, to pre-Soviet Russia is important because his story was a microcosm of the story of the United States at the time. What he needed most in his life were honor, dignity, and the respect of his peers. What the United States needed most in the years leading to the War of 1812 were honor and acceptance by other nations. Everything about America— its government, economy, and people— needed the respect and recognition of other nations. In order to survive as a country, America needed trade to thrive around the world. The United States needed to prove that it was no longer a child of England but a bona fide adult— a separate, independent, and sovereign nation with excellent exports.3

May God bless our nation with more leaders like John Quincy & Louisa Adams!