Choking on a Camel 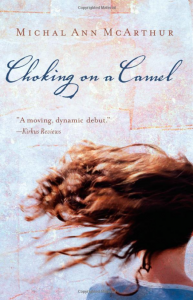 The title of the story is a reference to Jesus words about the Pharisees who strain at a gnat, but swallow a camel (Matt. 23:24).   The fictional story is about the main characterâ€™s experiences in 1980s at a familiar fundamentalist college.  Alex apparently struggles with finding any genuineness among her fundamentalist friends.  The world of her Christian college is too far removed from her unsaved familyâ€™s life.

She asks the age old theological conundrums. What about suffering?  What about the holocaust, what about hypocrisy, what about questioning the establishment, what about my own family members who struggle with divorce, vices, or who have died and gone to hell, etc.?  A lot of why questions. The answers are there for her but sheâ€™s too absorbed in her own struggles, and taken advantage of by friends and leaders, to hear. She is too afraid to ask those around her for answers.  Her conflict ends triumphanty no thanks to those around her who should have known better, and the author seems to be making an indictment on all fundys for our insensitivity and shallowness.  Itâ€™s a good reminder to us after we have grappled with those hard questions of life to learn to communicate the answers lovingly and biblically.

However, the world created by the author is a distortion of protestant fundamentalism.  I wonder if in the 80â€™s the fundamentalist churches and schools were the last to retain a culture that was a remnant of the pre-60â€™s era, a more polite, straight-laced, conservative era. The world of the Cleavers and Father Knows Best is gone, and the fundamentalists found themselves still fighting for purity and righteousness in a topsy-turvy world.  Hypocrites and bigots and self-centered, egotistical and abusive people can be found in any society, not just in historical fundamentalism.  I grew up in a fundamentalist home, a fundamentalist preacherâ€™s kid, I went to a fundamentalist grade school, I went to two fundamentalist colleges, and most of the time, the rules I lived under were pretty strict.  Not once did I ever hear from anyone in any institution say that if I didnâ€™t step up and tow the line or obey the rules that I was going to hell or that God would love me less.  In fact, I was told more times than I can remember that works do not save, only Christ saves.  I met good friends in all those places, and I avoided hurtful and hypocritical people in all those places.  Overall, where there was genuine faith, there was genuine Christian love along the journey.  Anyone who got a different impression wasnâ€™t listening.

Beware of the gritty language especially toward the end.  So read it if you like a moving portrayal of a spiritual journey, but rememberâ€¦itâ€™s not the only kind of experience to be had in fundamentalism.