Countering the Claims of Evangelical Feminism 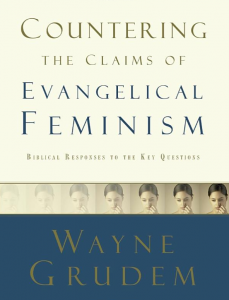 This book is a condensation of the comprehensive book Evangelical Feminism and Biblical Truth: An Analysis of More than 100 Disputed Questions.  Wisely, Grudem understands that the lay person would not have always have the time or desire to trudge through the minute details, so this condensed work (309 pages) is just right.  He does give the references back to the big hefty book in case someone wants more than what she finds here.

The book is structured by first giving the egalitarian claim, along with references and quotes so there is no misunderstanding of what they mean.  Then Grudem gives his answers, usually multiple answers, that counter the egalitarian claim. Hence the title of the book.  This makes for easy reading and a good reference work after the fact.

He gives enough references to feminist works to show that their pseudo-scholarly works actually have no basis.  Especially in the meaning of specific words like “head” or “authority”, egalitarians like to change the meanings, but Grudem very clearly points out that many of those meanings are simply incorrect or even just made up.  This is where the lay person should highly praise biblical scholars and their attention to detail!  What a blessing it is to me to watch this debate from afar.

Grudem adeptly lays out the serious errors of the Egalitarian position.   He shows that it upends the doctrines of the Trinity, the concept of Sola Scriptura, and the nature of Male and Female. Egalitarianism is in grave error!  These are heavy charges, and are not met with flippancy.

The basic question underlying this controversy is obedience to the Bible.  That is a major doctrine and it is a core issue.  Throughout this book and throughout Evangelical Feminism and Biblical Truth, I have pointed out various ways in which egalitarian claims result in a rejection of the authority of the Bible over our lives.  This happens through saying that certain passages no longer apply to us today, or saying that certain verses are not really part of the Bible, or saying Paul’s reasoning from the Old Testament was wrong or saying that the reason for Paul’s command was something other than what he gave as the reason, or saying that the New Testament epistles are descriptive rather than prescriptive (and show us what was happening in the first century, not what we should do today), or saying that people can disobey what the Bible says if the elders or pastor give them permission, or saying that what we should obey is not what the New Testament says but our best guess as to where its “trajectory” was leading, and so forth.

But this repeated theme in the egalitarian position shows what is really at stake in this controversy is the authority of the Bible.  I am convinced that if the egalitarian position prevails, the principles it has used to interpret and apply Scripture will soon be broadened to many other areas of life, and no moral command of Scripture will be safe from its destructive procedures.  Then the church will mimic the popular views of its culture in one issue after another, and Christians will no longer be subject to the authority of God speaking through His Word.  I believe this is the direction egalitarianism is pushing the church (page 222).

I agree with him.

Just one area of disagreement…

I found just one area in which I would disagree with Bro. Grudem. Wayne Grudem is not Baptist and not fundamental, and I am.  So it comes as no surprise that there is a little bit of difference when he applies the principle of women’s submission and not usurping male authority when it comes to church polity.  Chapter 2 included a list of 28 offices within the church, and he also lists 35 activities and 20 public recognition/visibility issues within the church.  At the top of each list are those things that only men should participate and then he draws a dividing line along the way below which women may also participate.  He puts performing a baptism below the dividing line.  So he thinks it’s possible for a woman to perform a baptism, but he puts a caveat that this is for “churches where this is not exclusively the role of clergy or elders.”  He does this because he recognizes that this issue of the male headship and female submission is a cross-denominational issue.  His purpose is to be as broad as he can.  So of course as a historical dispensational Baptist, I do not hold to elder rule, and I see 2 biblical offices: Pastor (also called the elder, the overseers, the shepherd) and Deacons (not the same as elders).  These two offices are for men as outlined in 1 Timothy 3.  In Baptist churches, the performing of baptisms has been the job of pastors, because it is a church function, not a discipleship function.

I have heard of a few women in the circles where I fellowship who don’t think it would be wrong for a woman to baptize another women whom she’s led to the Lord.  This is where they got the idea, possibly.  It’s not a historical baptist view.