Finding God in the Lord of the Rings 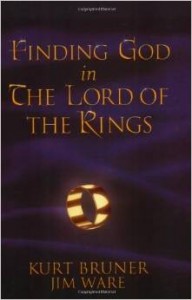 The Lord of the Rings trilogy is one of my favorite works of fiction!  J.R.R. Tolkien left us a masterful story that has captured the imagination of yet another generation since its first publication.  However, I must disagree with these authors’ premise that one can “find God” therein.   Even though the authors carefully avoid calling the trilogy a “covert allegory of the Gospel,” I do not think it “can open the heart’s back door when the front door is locked.”

The trilogy does give us wonderful lessons of bravery, friendship, sacrifice, love, the nature of evil, and even the concept of Providence, all done with an incredible amount of imagination. The story does start with a Christian world-view, as opposed to Dualism (Star Wars) or outright Occultism (Harry Potter).  The story does have an “ultimate Creator-Being” who vaguely controls the direction of Middle Earth, and there are some Christian themes (the King returning, ultimate defeat of Evil, etc.).  But we ought not to equate these good morals with some sort of new method of spreading the Gospel.  The good lessons are not specific enough to give us a complete lesson in Christianity, much less to give us the whole Gospel.  I fear that we are going overboard in our pre-evangelism when a work of mere fiction is used in witnessing. Let us remember that Tolkien was a Catholic with a works-based view of salvation.

Even C.S. Lewis said, “I do not think the resemblance between the Christian and the merely imaginative experience is accidental.  I think that all things, in their way, reflect heavenly truth, the imagination not least.  ‘Reflect’ is the important word.  This lower life of the imagination is not a beginning of, nor a step toward, the higher life of the spirit, merely an image.”  (C.S. Lewis, Surprised By Joy.)