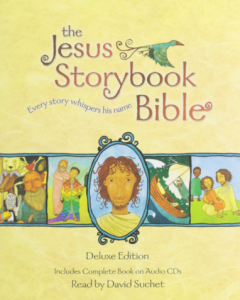 Sally Lloyd-Jones has written quite a popular children’s Bible published under the children’s wing of Zondervan Publishing.  I might rather have called it, “the Children’s Bible Storybook” because it is not a Bible.  It’s not a translation.   It’s not even really a paraphrase. Maybe we might call it a children’s devotional book.  It is a storybook based on the Bible much like the Christian Bible history fiction books.  We know things didn’t really happen that way, but it’s close.  And maybe it drives us to find out more about that particular account in Scripture.   It reveals more about the author’s imagination than about the Bible.

So is it good to read it to kids?  Will they understand that nuance?  The line between fiction and truth may be blurred a bit too much for children, but in the end that’s up to every parent to decide.  VeggieTales takes literary license as well, but it’s more obvious in their stories than in this one when the story departs from Scripture.  I happen to think kids can understand just fine if you read from the Bible.  They may not grasp all that is there, but they are gleaning  line upon line, precept upon precept, here  a little, there a little (Is. 28:9-10).  We’ve done family devotions with children’s devotional books before.  They might serve as a jumping off place for discussion. This book can be used in a similar way, but I would encourage follow up with the real account and not just leave it at this reading.  In fact, each chapter title gives the reference out of which the author drew her writing which is helpful.

Having said that, I thought the book was really beautifully written overall.  I love the subtitle, “every story whispers his name.”  Christ is the centerpiece of Scripture and that is right. The illustrations were wonderful.   A lot of good concepts were highlighted.  For example,

The literary license taken doesn’t bother me so much.  Many books and movies, especially those geared toward children do this. The overall theme is the love story.  The question arises though, is the overall theme of the Bible the love of God?  Or is it God himself?  By pointing to God’s love of us, it does glorify God, to be sure.  But God’s primary attribute is His holiness.  The Bible is the story of God’s redemption of a fallen world because of His love for us.  So what came first?  The love?  Or the holiness?  This debate has been going on for decades.  This author says, love came first.

I wouldn’t go so far as to say there is a false gospel being taught here, but it might lend itself to non-baptist and non-dispensational theology.  Again, it is up to every parent to decide whether to use the book themselves or not.  I’m torn.  Which means I probably won’t use it.