What’s With Paul and Women?

Unlocking the Cultural Background to 1 Timothy 2 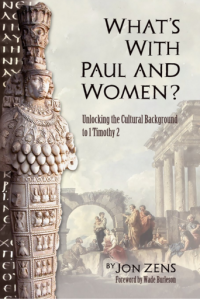 I came across this book when reading an article which responded to the patro-centric error found in many conservative and homeschooling circles.  What’s with Paul and Women? brings out many good things about the value of women and the fact that we are all brothers and sisters in Christ first of all in all our relationships.  However, Zens leans a little too heavily on using the cultural context to excuse our own application of Scripture.  That is, he sees the New Testament as descriptive of life and godliness rather that prescriptive.  Now, knowing the context of Biblical writing is definitely key to understanding the meaning of words, but I cannot dismiss Paul’s admonition to the Ephesians simply because I don’t deal with temple prostitution in my own culture.  Paul is applying truths to the early church’s cultural context and we should apply those truths as well.

For example, Zens describes the debauchery of Diana (Artemis) worship and how steeped in it the Greek culture was.  This particular idolatry exalted women too highly and placed them as priestesses in the temples.  This practice was spilling over into the church, and Paul admonishes the women to learn in the church in “silence”.  Zens then draws the conclusion that because Paul was addressing a particular problem in their culture, we can’t really say that women should never teach in mixed groups.  He also tends to equate leadership with dominance  and submission with inferiority, which is typical of egalitarianism.

To be fair, Zens states he is a complementarian not an egalitarian when it comes to gender roles.  However, I think in practical terms he is actually in the egalitarian camp, stopping short of saying that men and women are interchangeable in their roles.  If he were truly complementarian I would agree with him.  We differ in that he does not see any hierarchy at all as it regards gender roles in the Scriptures, and I do find an “ordering under” (that military type heirarchy) in leader/follower relationships.  He is right that we are to serve and submit to one another, and those in leadership positions are not to lord it over those subordinate, but this truth is not emphasized at all.  Zens allows for an egalitarian approach to authority in particular.