Scroll to Top
Categorized as
2800
Tagged as
DevotionsSanctificationScripturesubmission
Related 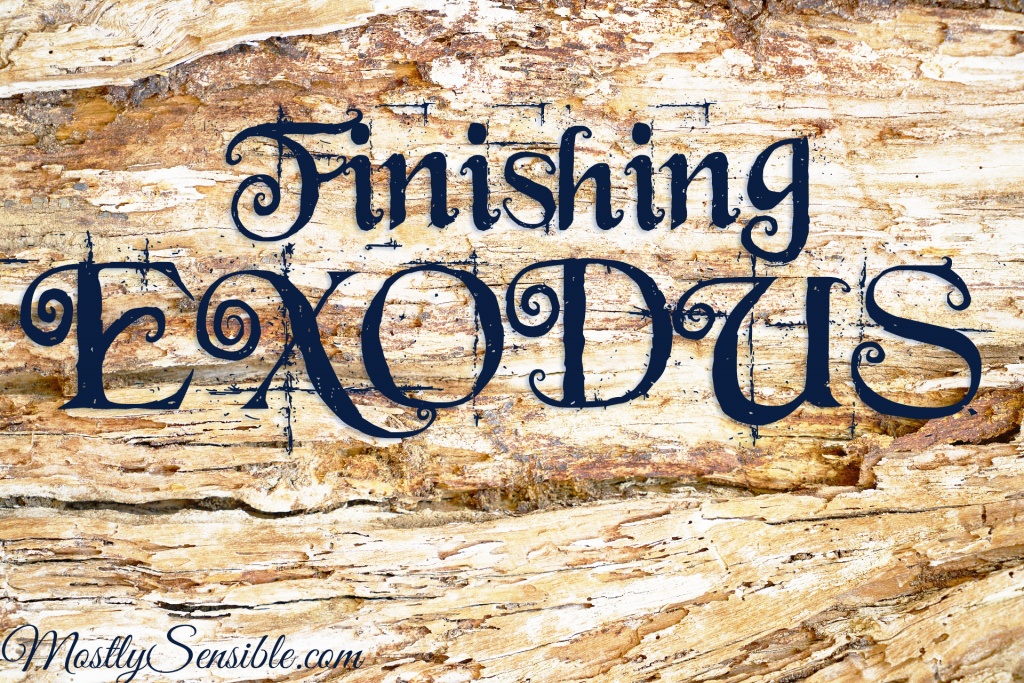 Sigh.  We are all like the children of Israel.

Exodus is an exciting and action-packed book, isn’t it?  Giants, monsters, chases, escapes, true love, miracles.   (Ok, giants don’t show up until 1 Samuel, and I’m past the allusion to The Princess Bride.)  But Exodus is really an easy book to read, and it is so easy to see why God put it in the Bible for us.  The hard part is applying the truths to ourselves.   We are getting close to February and beginning to read the book of Exodus if you’re following my Chronological Reading Schedule.  So let’s keep these ideas in mind as we read this month.

The law of Moses in Exodus is so clear and practical!  God not only gives the law itself, but He often sets forth the underlying principle involved.  He tells us not just the prohibition,  but the principle it violates.  This is a tremendous help to me as a New Testament believer.  I’m looking at the Old Testament  with eyes for the principles I need to apply to my current circumstances.   So Moses has helped me!  (Ex. 23)  Here are some themes that stood out to me as I read Exodus.

God clearly and graciously lays out His plan in Exodus 23 for the way He would conquer the land. It would have been a wondrous thing to behold!  But we know that the 10 bad spies and the murmurings would prevent God’s full blessings.  There were always murmurings, rebellion, and impatience.    I’m always embarrassed by the Israelites’ journey.

God was always the same.   His nature is displayed in Exodus in dramatic ways as well as subtle.  God provided a way to come to Him under the Law by way of the tabernacle and the mercy seat.  It was the only way.  We also read that God is sovereign and always in control.  He was gentle and powerful at the same time with His promises and protection and leading.  He is unique among the gods and cultures of the other nations.  God’s power was shown in the shekina glory in the pillar of fire, in the tabernacle, and in the plagues.  God was so close to Israel that they feared Him (Ex. 20:20) as well they should.

God is the same now as He was then, and we also ought to behave ourselves with fear and reverence and awe.

The concept of artistry is given a prominent place.  God filled the artisans and consecrated their workmanship when the Tabernacle was being built (Ex. 28:3; Ex. 35:26, 31, 35; Ex. 36:1-2). God fills them with the spirit of wisdom to do this.  Have you ever seen an artist or artisan work?  A good carpenter or builder will have a kind of wisdom that makes him think ahead to the final product and do what is necessary to bring about that outcome.  A quilter will combine her knowledge of the craft with a particular vision for the final design and the needed work and time involved to accomplish it.   I know some fiber artists here in Alaska,  and they do this too.  They have in mind the way the piece should look.  They consider the materials, the type of fiber and how it’s spun.  (Ex. 35:25-26) It’s truly amazing. In like manner, God expects us to exercise this kind of thought and wisdom, relying on the Holy Spirit and following His leading ultimately, to accomplish what He’s given us (filled us) to do.

These are very interesting lessons about artistry, in my mind.  Certainly God loves what He prescribed to Israel in the Law.  He said to make the Ark in a particular way.  He said to build the Tabernacle in such and such a way.  He directed Solomon to build the Temple in a certain way.  The New Testament is all about how God wants us to build His Church in a particular way.1  So we can infer some great truths.  There needs to be beauty to prevent gaudiness  or triteness.  Things that are beautiful are subjective to be sure, and something that was beautiful in 1960 will not be in 2018.  But if something is recognized as beautiful it will speak to the following concepts.  Worship also needs needs to have a priority to point to Who is really important, and to highlight that we are the ones that need to be purified.  We are the ones who have to change, not the One who is truly worthy of worship.   Of course, the function of an element of worship, whether a part of the program, or a type of table or chairs must be considered for every act of service to the Lord.  This needs proper preparation and diligence and at least a little skill.  Even luxury in its place is addressed in Exodus because displaying to the Lord our best is the best use of our best.  I say “luxury in it’s place” because sometimes the best possible is not always available.  And simplicity really is the rule of the day in the New Testament, which is different than in the Old Testament.   The children of Israel were called to conquer the land and inhabit it.  We are called to suffering and serving.  But we are all called to holiness to an exalted Lord.  So there is a place for luxury in the sense that we don’t always have to use the cheapest, or leftover, or simplest in our churches.  Doing our best is what is called for.  This is why the song “Simple Gifts” doesn’t always sit well with me.  Sometimes being simple isn’t a “gift to be free”; sometimes it’s a kind of bondage in itself.

I’ve always thought it was beautiful that the Lord wanted decorative elements on the priests garments and in the temple and on the tabernacle.  It reveals value in detail work.   I often think of ladies when I  read these portions of Exodus. We like to feather our nests at home and work and other places.  There is sentimental value, maybe a practical element, but mostly it is simply to make things pretty. The pomegranate motif is tasteful and simple, just the right touch.  The garments were to be artistically woven (Ex. 28:15).  This is what I think of when I read these almost tedious passages in Exodus.

The Heart of Man

If you look closely, you can learn about the heart of man in Exodus.  There are several facets of Biblical anthropology.  It shows up in the need for rest and refocus as in the Sabbath law (Ex. 31:17).  There is rebellion in the face of God’s awesome power and provision as in the Golden Calf incident (Ex. 32).  I think it’s interesting that the people turned from God and Moses when He delayed in coming down out of the mountain.  Patience is a tough part for us followers.  Israel had a hard time waiting.  Following.   Slowing down.  I can just hear some of them saying, “That leader of ours isn’t doing anything!  Forget it, let’s do this instead! (Ex 32:1).  We don’t KNOW what happened to Moses.  We have to know what’s going on, or I’m not going to follow.”   And on top of that, Aaron was a people-pleaser, who should have said, “Just wait.  Watch what the Lord will do.   Follow Moses’ lead.”   Instead, he went along with it and even led in the impulsive, impetuous act.  He might have said, “Let’s worship the Lord the way I see fit.  We’ll substitute the boring frustrating patience and fear and trembling with a more familiar mode, the way we’ve always done it” (because they grew up in Egypt watching pagan rituals).  “We’ll offer this, our very best calf-worship ceremony to the Lord.  Won’t He be happy with the sincerity of our heart?  This is much better.”  And so, instead of being satisfied with God’s dynamic miracles and manifestations, we get to be dynamic!  And it revived them!   They were happy again.  Look how ecstatic they were in Ex. 32.  “Look at us!”  Instead of “Look at God.”

God was not pleased.   He called it corruption, unrestrained ( Ex. 32:25), a shame, turning aside, stiff-necked, wrath-worthy.  It was only the intercession of a righteous man, and God’s own promise to the patriarchs that saved them from total annihilation.  But it didn’t save them from punishment.  And Aaron’s response was astonishingly self-serving.  Aaron’s relatives knew the truth, and in the end they were the ones who had to purge the camp of the rebellion.

Man’s heart is truly deceitful above all things (Jer. 17:9).

Giving reveals the willing heart of the people.  After a while, and after sin had been purged, the Israelites gave more than enough for all the work to be done on the Tabernacle (Ex. 35-36).  They also gave of their talents and time, not just their money (Ex. 39:42-43) with no return on their investment, so to speak.  There was no expectation of special privilege because they gave much. This was simply an act of worship.  It was not just the temple rites and services, but also the involvement and focus on God’s system of worship was what was needed.

Israel was a true theocracy.   We Christians are often criticized for wanting to make our countries a theocracy anytime we insist on biblical principles in the public sector.  In reality, we want nothing of the sort.  We know that can’t happen.  Israel was the only true theocracy in history, and their experience is the only one of its kind, and will be the only one of its kind until the Lord returns to set up another theocracy Himself (Isaiah 9:6-7).  God was WITH them.  He spoke audibly and face-to-face with Moses.  He personally gave them laws to live by.  He miraculously led them and protected them.   The nation didn’t come about by a continental congress, or by a freeing of slaves.   Nothing like what God did for Israel has ever happened again.  It does not happen for the church and it doesn’t happen to any other nation.2   This was a unique thing God did.  This truth has ramifications in how we interpret the OT.  We cannot take the promises meant for Israel and apply them directly to us.  So those distinctions are fun to read through.  I like to exercise my mind on those concepts.

Related to the theme of the Theocracy and the nature of man’s heart, some of the most encouraging and challenging portions of Exodus are the lessons for leaders.  Moses was nervous about leading.  He tried to get out of it.  He needed God’s enabling. He had to deal with obstinate and wicked people as well as faithful followers.  How did he do that?  How did God want him to do it.  How did God want Israel to follow?  Who did He want them to follow?  Under what circumstances does God expect leading and following to happen?  We ought to be asking ourselves these questions in our Age of Grace as well.  It speaks to issues of pastoral leadership, family headship, personal commitments, and governmental authorities.  I tell you, these concepts were so good to walk through! 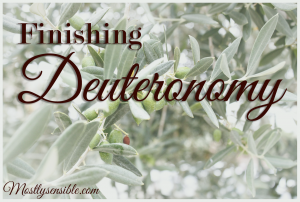 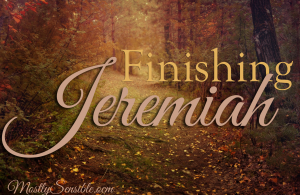