Scroll to Top
Categorized as
4681
Tagged as
DoctrineParenting
Related 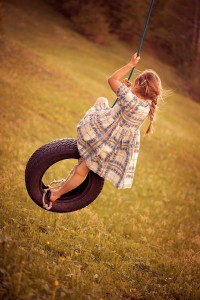 Yesterday it seemed like my children were in trouble all day long.  It was a long day.  I wondered if I’m doing this right.   Are my expectations too high?  Have I not expected enough?  I want to believe that my own parenting style is fine because I can see parents who are more permissive than I on the one hand, and on the other hand I can see parents who are more overbearing than I am.  So I must be ok, right?  In light of the so called “Mommy Wars”  we are now more aware of the various ways of raising children.  We see free-range parenting, tiger moms, attachment parenting, Baby Wise

or Give Them Grace.  Many just want to throw up their hands and forget the whole debate.  But of course, what we do with our kids is important, and there are some extremes we must avoid.  There is no formula to perfect parenting.  There’s no guaranteed way to produce a mature, godly adult.  So what are we to do?

I believe God ordered history into dispensations.  That is, God treats us differently in the unfolding story of time.  I see some parallels between Law and Childhood and between Grace and Adulthood.  He has required some things from us under the Dispensation of the Law that He does not require now in the Age of Grace.  That is just like an earthly parent’s rules for the children are different than they will be when that child grows up.  We might say that my kids are in the “Dispensation of Childhood”, and my husband and I are in the “Dispensation of Adulthood.”  In the same way, Law and Grace are not incompatible.  We can’t have one without the other.  They are just different ages of stewardship.

The Children of God under the Law

Is the law then against the promises of God? God forbid: for if there had been a law given which could have given life, verily righteousness should have been by the law.  But the scripture hath concluded all under sin, that the promise by faith of Jesus Christ might be given to them that believe. But before faith came, we were kept under the law, shut up unto the faith which should afterwards be revealed.  Wherefore the law was our schoolmaster to bring us unto Christ, that we might be justified by faith.  But after that faith is come, we are no longer under a schoolmaster.

Gal. 3:21-25 draws a word picture of a child maturing to adulthood.  The thought is that the Law of Moses was a guardian (Gal. 3:24) until full maturity of faith in Christ’s atoning work was possible.  It is describing a change in dispensation.  The expectations are different from one era of life to another.  Now, the only way that parallel in Galatians 3 can make sense is if it is true in the physical sense that a child lives under the law of the parents (Prov. 1:8, Prov. 6:20) until such time as he can make mature decisions on his own.  He would then be free from that law.  Children live under a more structured, strict, even unyielding atmosphere, as did the nation of Israel under the Law.  Separation from danger is stark because the shelter of a home must provide a safe place for the foolishness of childhood ways.  Although love and faithfulness and protection must very evident from the parents, obedience is paramount for the child.  It shows a faith in the caregiver.  Parenting ought not to be permissive, but rather I believe it ought to actually err more on the Law side than on the Grace side.

In the Bible, God required much from the Israelites.  Salvation and righteousness was found there under the Law of Moses, not outside of it. Although belief in God’s promise was what made them righteous (James 2:23), the keeping of the law was prescribed by God Himself as the way to demonstrate that faith.  Whenever Israel stepped outside of their boundaries, disaster lay in her path.  When Israel placed themselves back under the God’s authority in faith, He blessed and provided supernaturally.  Even when the whole family of Israel was going astray, there was always a remnant of faithful law-keepers whom God blessed and empowered showing that individuals can come to God no matter what their culture is doing.  In the Old Testament, we learn lessons about God’s character which may help us as we think about parenting.  Sometimes it almost seems like God overreacts in cases like Uzzah touching the ark (1 Chron. 13:7-14), or Moses being punished for striking rather than speaking to the rock (Num. 20:11-12).  It is clear that God’s holiness is more important than we realize, that obeying Him was crucial.  It is like a child who is spanked because he won’t pick up the toy as mom told him to do.  Does the toy mean anything?  Could mom pick up the toy?  Of course.  But the lesson is not about picking up toys, though that is valid.  The lesson is about who has the authority and who must be obeyed even in small things.

Maybe I can sum it up with this chart .  You’ll notice that Love is present in every dispensation.  That is why Paul could say in 1 Cor. 13:13 that the greatest virtue is Love, because it transcends all of it. 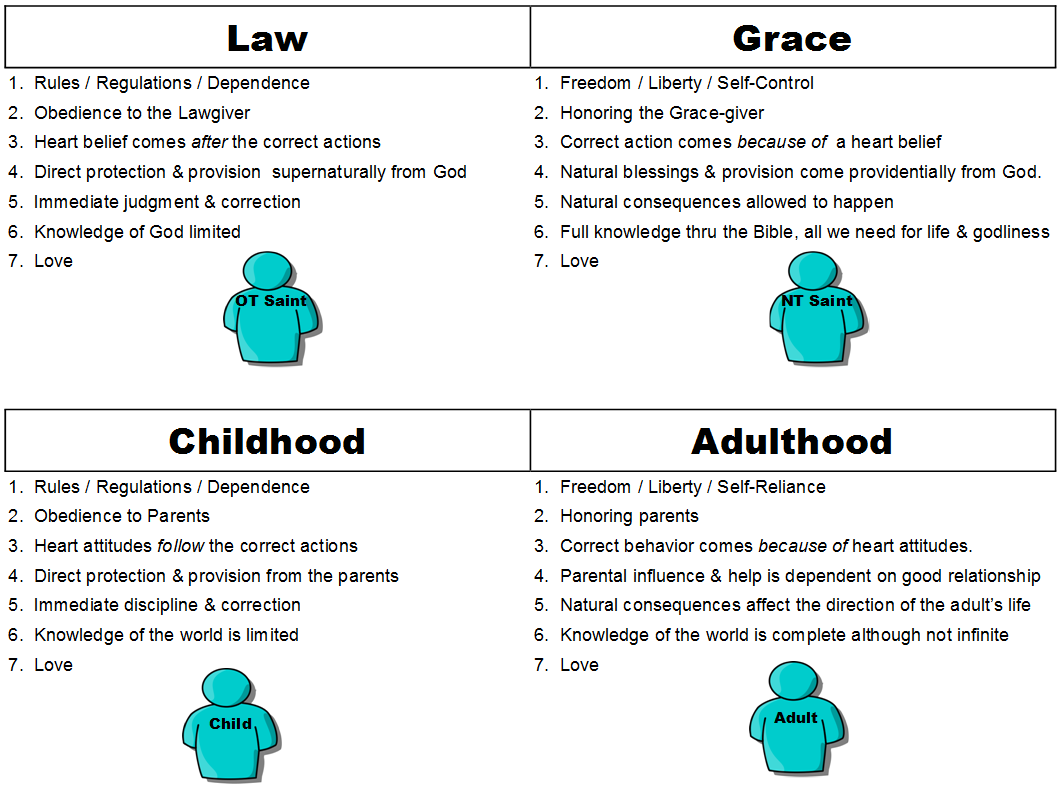 Distortions of this Principle

I think that if we move outside of these principles we tend to run into problems.  I have seen the error of parents who will not let their children go, who make it too hard to leave the nest, or parents who try to make their adult children conform to rules and responsibilities they had while they were children. These are ways of putting a mature adult into the Law / Childhood column.  Again, it is rare to find this to an extreme, but this is a sad scenario even in moderation.  It is disappointing  to see young adults, good straight arrows (Psalm 127) ready to launch, but the pull back to the nest is too strong. 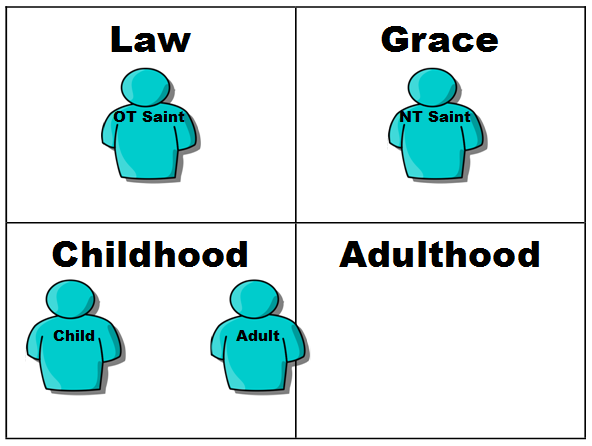 Also on the parenting front, there’s a popular book in Christian circles called Give Them Grace which basically puts children in the Grace / Adulthood column of my chart.  Maybe they also are not going to an extreme, but this is the main problem with permissive parenting whether Christian or not.  Perhaps even rules are non-existent in this household.  That is like the pagan nations, or Israel when she neglected the Law, who needed to be proselytized into a place where the truth and salvation resided through faith (Rahab, Ruth).  God’s grace was working on the pagan nations, just like God works in the hearts of all children even those who are not being taught the things they need to learn at home. 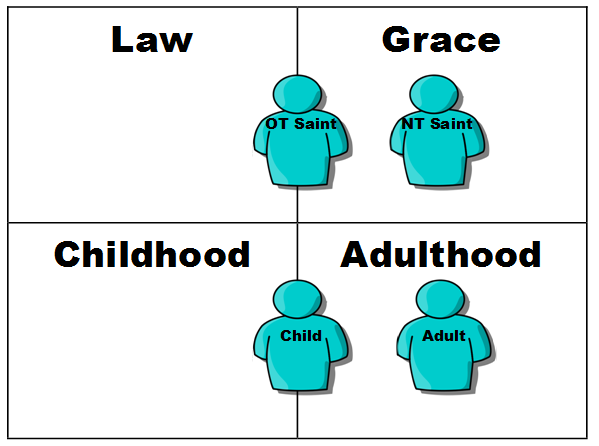 A rebellious child who cannot even obey the straightforward rules of the home has a heart problem and will not learn what he needs to learn to be a mature adult.  This is like the Old Testament characters who never could submit to the Law and therefore were not sons of the promise.

What about the childhood that was truly too restrictive, even abusive? It is possible after that to live a healthy mature life but only with difficulty. In this regrettable state, neither the adult nor the child is living under the stewardship they should. 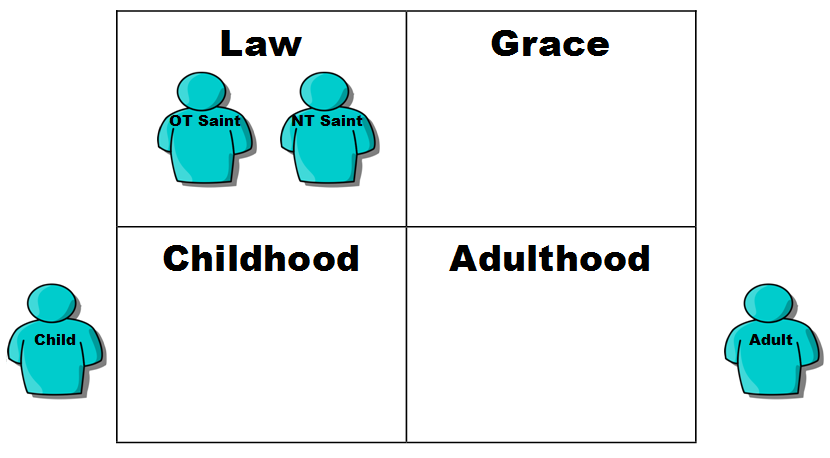 If the picture we are to follow is that the Law of Moses was a “schoolmaster to bring us to Christ” then it follows that childhood years should be the time for rules and structure and at least outward conformity.  Not because outward obedience is the goal, but because mature,  responsible, disciplined adult is the goal.

Immaturity and maturity.  Childhood contrasted with adulthood.  We parents should not feel insecure about setting high standards for our children any more than God did for the Israelites.  When it comes time for them to move out of the house, let us do it with love and grace.

Don’t miss reading “Part 2:  The Children of God under Grace.”

Please Note:  This illustration breaks down in that, unlike God, parents are sinful creatures.  As in any Leader / Follower relationship, a leader has primary authority, but not sole authority.  A child does not have to obey a parent if that parent asks him to sin.  Ephesians 6:1 tells children to obey their parents in the Lord.  God protects and gives grace those who find themselves under the rule of a despot, and there are avenues to confront or escape if the situation warrants.  We all must ultimately seek God’s approval no matter what the cost.

1 Comment so far. Feel free to join this conversation.