Scroll to Top
Categorized as
7562
Tagged as
ChurchLogicalMissionsSensible
Related 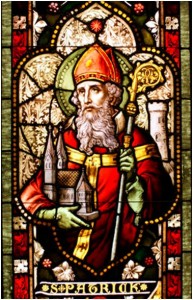 It has long been an interesting thought to me that the missionary we call Saint Patrick was more like a Baptist than a Catholic.  The Roman Catholic Church has “kidnapped” this faithful servant of God from his humble calling to preach the gospel to Ireland, and venerated him. Maybe I enjoy hearing his story in the month of March because some of my own heritage is Irish (from the Condren clan on my father’s side which used to be “O’Condren”).  But even deeper than blood ties, I enjoy the link to the history of my spiritual ancestors of the Baptist faith.  Of course, there was no such group called “Baptist” or even “Anabaptist” in the 5th century, and even the Roman Church was in its infancy.  It wasn’t until centuries later that the papacy decided to make Patrick a saint.  But the point of this history is that Patrick’s belief and practice of preaching salvation by faith alone, baptizing adult converts, and following a personal call to mission work directly from God (rather than from Rome) was not very much like the Catholic Church’s system of belief.  It was more like a Baptist.

The following article is taken from the Baptist Bulletin, March 2011.  I also enjoyed reading “Patrick  and Carey- Two of a Kind” written in February 2011.  A more detailed outline of Patrick’s history is this article, “St. Patrick, A Baptist!” by L.K. Landis, although beware.  Landis takes the view that there is a line of succession leading from true Baptist churches today all the way back to the Apostles.  I don’t hold that view, however, it is true that there have always been remnants of believers throughout history who have been faithful to God’s Word and to His gospel.  So if you want to call that Baptist, maybe it’s just semantics.  Landis is ridiculed on the internet for this view, but the history that he gives is still interesting and makes my point.  If you have a heart for missions, this is such an encouraging study!  To read about a man only a little more than 200 years removed from the Apostles who carried out the Lord’s work in a foreign land is a challenge to us to reach the world for Christ.

The man we know today as St. Patrick was kidnapped twice: first by Irish pirates, then after his death, by the Roman Catholic Church. The first was the impetus for Patrick’s entrance into ministry. The second exaggerates Patrick’s relationship to the church in Rome and its influence in the missionary efforts of the fifth and sixth centuries. Patrick’s own writings and the historical record show that Patrick often sounded more like an evangelical (or even a Baptist?) than a Roman Catholic.

No Mention of Rome

Patrick claimed to have served as a deacon, presbyter, and bishop. In his “Letter to Coroticus,” he wrote, “I, Patrick, a sinner, unlearned, resident in Ireland, declare myself to be a bishop. . . . Most assuredly I believe that what I am I have received from God” (in R. P. C. Hanson, The Life and Writings of the Historical Saint Patrick). While this may simply be a way of giving God all the glory, Patrick was silent regarding any formal education, ordination, appointment, or support by Rome or any other church, suggesting instead that his ordination came directly from God.

At the end of his life, when writing his autobiography, Patrick asserted that his training and education were not of the same quality as his critics’, because “I have not studied like others” and “am evidently unlearned” (Patrick, Confession of St. Patrick). In spite of apparent modesty and limited formal education, Patrick knew doctrine and Scripture. He quoted or alluded to Scripture 195 times in 84 short paragraphs that make up both his Confession and his “Letter to Coroticus,” showing a high regard for Scripture and doctrine.

Historian R. P. C. Hanson says the British clergy of Patrick’s day were not bound by the constraints of Roman Catholic hermeneutics, for “British clergy apparently did not concern themselves greatly with allegorization or far-reaching speculation, but appear to have concentrated in an admirable way on what we today would call the heart to the Gospel” (Hanson, The Life and Writings). Patrick exhibited this orthodox bent in his writings, quoting extensively from the Bible and particularly from the book of Romans (17 times). Patrick had a clear and practical grasp of justification by faith (The Life and Writings).

There is no mention of any appeal to Rome or of any history with Rome in Patrick’s writings. Instead, Patrick affirmed that it was Christ Who propelled him into his ministry: “Christ the Lord, who commanded me to come to be with them” and “He [God] chose me for this service” (Confession). In his “Letter to Coroticus,” Patrick asks, “Did I come to Ireland without God, or according to the flesh? Who compelled me? I am bound by the Spirit.” Here, in a protest against a British chieftain who raided Ireland and sold several of Patrick’s converts into slavery, the missionary makes no claim of a commission from Rome, which would have given him the weight of temporal authority. Instead, he relies entirely upon the authority of Scripture to make his appeal. It would appear that Patrick’s ministry was independent of Roman Catholic instruction and control. As such, Patrick’s missionary work was the first well-known independent missionary enterprise since the apostles. It was grounded in a clear understanding of the authority of Scripture and orthodox theology, which was drawn from personal study and application of God’s Word.

Not only did Patrick not mention Rome, but the Roman Catholic historian Bede didn’t mention Patrick, an odd arrangement indeed, if in fact Patrick had originally been sent by the Catholic Church. As Philip Schaff notes, there is no authentic record of Rome’s interaction with Ireland until nearly two centuries after Patrick’s ministry. Schaff explains, “It is strange that St. Patrick is not mentioned by Bede in his Church History, although he often refers to Hibernia and its church, and is barely named as a presbyter in his Martyrology. He is also ignored by Columba and by the Roman Catholic writers, until his mediaeval biographers from the eighth to the twelfth century Romanized him, appealing not to his genuine Confession, but to spurious documents and vague traditions” (History of the Church).

During his escape from his Irish captors, Patrick witnessed to his deliverers, assuring them that God would provide for and protect them. He said to them confidently, “Be converted by faith with all your heart to my Lord God, because nothing is impossible for him, so that today he will send food for you on your road, until you be sated, because everywhere he abounds” (Confession).

Patrick returned to Ireland at age 40 to devote his life to labor there, because “it behoved us to spread our nets, that a vast multitude and throng might be caught for God, and so there might be clergy everywhere who baptized and exhorted a needy and desirous people” (Confession). Though he had opportunity and encouragement to return to Britain, he said, “I am bound by the Spirit, who witnessed to me that if I did so he would mark me out as guilty, and I fear to waste the labour that I began, and not I, but Christ the Lord, who commanded me to come to be with them for the rest of my life, if the Lord shall will it and shield me from every evil, so that I may not sin before him” (Confession).

Patrick established a pattern and platform from which Irish missions continued for the next two centuries and beyond. Rather than trying to reproduce the Roman Catholic Church model, he tried to train and equip new converts in the faith of the Scriptures and Christ Jesus. This is evident in the nature of his ministry.

Philip Freeman points out that the worship services were plain, unadorned, most likely outdoors or in a small home or even a barn (St. Patrick of Ireland: A Biography). As the churches grew, they would have built simple structures out of local materials. Patrick would not have worn the traditional bleached white robes, which normally would have symbolized purity and cleansing from sin. Freeman surmises that Patrick would have added color or adornment to his robe to disassociate himself from the Druids, who also wore white in their worship.

From Patrick’s writings we learn that his teachings and practice were consistent with orthodox theology.

First, Patrick saw Scripture as the supreme religious authority. He never appealed to the authority of the church, even when it would have served him well. He never mentioned a church council or creed, although his doctrinal statement closely parallels the “Rule of Faith,” a creed common in his day (Confession).

Second, Patrick made no reference to baptizing infants. He once reported that he “baptized in the Lord, so many thousand men” (“Letter to Coroticus” in The Life and Writings). The word “men” implies that he did not baptize infants.

Third, absent from his writing is any mention of purgatory, Mariolatry, or submission to the authority of the Pope, which, although an argument from silence, suggests that Patrick did not believe in them, did not hold them as significant to true faith, or was ignorant of them.

Fourth, the legacy of Patrick’s ministry is evident in the churches he established, which continued to be sound in doctrine well into the ninth century. They were amazingly evangelical (compared to the Roman Church of the day), teaching original sin and the impossibility of salvation by human merits or effort, Christ alone being the sinner’s righteousness. Additionally they taught the vicarious atonement.

Fifth, in his Confession, Patrick recognized the agency of the Holy Spirit in conversion. No doubt it became a tenet of the church’s doctrine. Sixth, the teaching of justification by faith is a key aspect of Patrick’s contribution (The Life and Writings). Seventh, Patrick believed in the intercession of the Holy Spirit and of Christ (quoting Romans 8:26 and 1 John 2:1). But he never mentioned the intercession of saints, angels, or Mary.

While it is clearly hyperbole to suggest that Patrick was a Baptist, his contribution and heritage nonetheless are more keenly connected to our own Baptist heritage and theology than to Roman Catholicism. “Patrick was a simple believer in Christ before there was any such religious system as we have today in the Roman Catholic church,” concluded Kenneth Ohrstrom in a March 1958 Baptist Bulletin article.

Patrick should be rescued from his ecclesiastical kidnappers. That is, we have as much claim upon him as does Roman Catholicism. Patrick’s faith and practice were more consistent with our theology than with Roman Catholicism.