When Queens Ride By 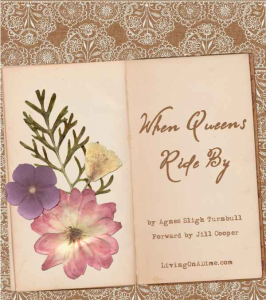 Agnes Sligh Turnbull’s stories have become popular among traditional women.  Some groups even have used the title of this book to encourage ladies in home-making, and really that is the value of this book.  Critics have called her old-fashioned, but that’s not a deterrent for me!

This is a short story about a woman and her husband who are trying to make a go of their small farm.  Their arduous work in the fields has begun to affect the peacefulness of the home because the wife has neglected the home in favor of working in the fields.  This in turn affects her husband’s demeanor and self-worth.  Some of the work outside the home that she does is unnecessary, but some work is what her husband desires of her to bring the farm along to more productive times.  A happy ending comes after a kindly visitor encourages the overworked wife to focus on her home.

Overall, the theme about using a woman’s strengths is just right.  Women do have tremendous influence over the home and her family by virtue of her attitude, deportment, and detail work.  The old saying is true that the woman sets the tone in the home.  Scripture definitely encourages the women to be keepers at home (Titus 2:5).  The Virtuous Woman of Proverbs 31 is focused on her home.  So whatever the husband wishes for his wife to do, she ought to also attend to her home as best she can in whatever circumstance she finds herself.  I can remember times, especially when there were babies to care for and out-of-the-ordinary events happening, that I let my appearance and the housework go.  It did seem to make everything harder not having tended to the simple chores of the house.  So the story was a good reminder to women how important it is to keep the home fires burning.

The drawback is that the book is not expressly Christian, even though it is traditional.  Unfortunately, a simple little theme is inserted that is actually demeaning to men. I’ve seen it before in some books:  Our husbands think they want A, B, or C, but really they don’t.  You as a woman really know what is best.  No matter what he says, you need to be at home.  Here’s how it appears in the story.

“Men are such queer things, husbands especially. Sometimes we blunder when we are trying hardest to serve them. For instance, they want us to be economical, and yet they want us in pretty clothes. They need our work, and yet they want us to keep our youth and our beauty. And sometimes they don’t know themselves which they really want most. So we have to choose. That’s what makes it so hard”. She paused. Jennie was watching her with dull curiosity as though she were speaking a foreign tongue.

Then the stranger went on: I had to choose once, long ago; just after we were married, my husband decided to have his own business, so he started a very tiny one. He couldn’t afford a helper, and he wanted me to stay in the office while he did the outside selling. And I refused, even though it hurt him. Oh, it was hard! But I knew how it would be if I did as he wished….”

I asked my husband about this because I have picked up on this often in some conservative writings, and he heartily agreed that this is a major problem with the book.  Who is to say (in the instance above) that the wife would have been able to return to full-time domestic bliss sooner if she had helped her husband get the business off the ground at the beginning?  I guess she’ll never know because she took the lead and insisted on her way.

There is no magic in the virtue of keeping the home fires burning.  Your man is not hypnotized into being a better man by virtue of your domestic skills.  My husband tells me, THAT thought is not helpful in building up a man.  He saw it as manipulative.  We traditional women like to point to Titus 2:5 at the “keepers at home” phrase, but we tend to forget the “obedient to husbands” phrase in the same verse.  Probably your traditional husband would agree that ideally the wife should be at home, but in our fallen world it is not always possible at times.

So my encouragement is not just to be traditional, but to be biblical.  Philippians 2:8 says that Jesus had no limit to his humility.  There was nothing that he wouldn’t do for the sake of the Father’s glory, even death.  As we women seek to use our strengths for the benefit of our homes, let us not be prideful in it.  Neither let the home be an idol.  Most often, it is true, we help best by being a keeper at home because that is the role we have been created for.  Let us humbly be our husband’s helper in whatever way he needs.   Homemaking is not our focus, though.  Glorifying God is our focus.