A Year of Biblical Womanhood 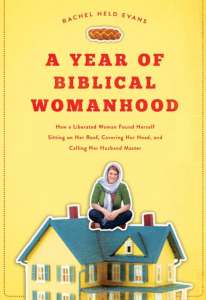 Reading this book was like watching the Bill Nye vs. Ken Ham debate about creationism.  The subtitle is “How a Liberated Woman Found Herself Sitting on Her Roof, Covering Her Head, and Calling Her Husband Master.”  The author came from a completely different world of thought from myself and there was little common ground at all.  Books like this are good for me to read periodically, but it’s frustrating and sad in the end.  There were so many points of difference and caricature and ridicule, that I had to put my boxing gloves away and just think a while about what the fundamental differences are between Rachel Held Evans and me.  I narrowed it down to four.

Primarily, the problem I saw in the book was her lack of understanding, or her refusal to understand, what is meant by a “literal interpretation of Scripture.”  Her definition of “literalist” is ridiculous and uncharitable forcing a caricature of fundamentalism.  What she describes is nonsense, and I’d agree with her if it were true.  Rather, our definition of “literal” is reading the plain sense of the text.  For instance, she ridicules us for “making Proverbs 31 a “To Do List”, and to illustrate she makes a Proverbs 31 beauty queen sash to auction for charity.  Issues about head coverings, wearing skirts, domestic skills, child-bearing, keeping feast days and purity laws all become part of our To-Do list in our pursuit of Biblical Womanhood.  I rather doubt that she really did any feast days growing up in a traditional church (she never says exactly what type of church she grew up in), but her point is that we pick and choose which Scriptures to follow and which we do not.  By pointing out how futile it is to truly be literal (in her sense of the word), she concludes that really there’s no correct interpretation of Scripture.  It’s all subjective anyway.  As a result, for Evans the Bible is merely descriptive of ancient times, not prescriptive to our everyday lives.

Secondly, much of her misunderstanding of Biblical Womanhood would be easily overcome if she had a dispensational understanding of Scripture.  Her objections to leverite marriage or feast days or purity laws are easily explained if one understands the purpose of the Law and how the Age of Grace differs.  However, I must say, I do think that some strange behaviors in some fundamentalist circles are rooted in a non-dispensational interpretation of the Bible as well.  So I’ll give Evans credit for pointing out the inconsistencies with trying to follow some of the Old Testament precepts and not others.  I noticed that she didn’t take any little lambs out to sacrifice at Passover time, so I must assume she knows that there’s more to the story that what she outlines.

Thirdly, the most aggravating thing is Evan’s use of Hegel’s dialectic.  Her beginning thesis is that there is no such thing as Biblical Womanhood as described by most fundamentalists and conservatives.  Then her thoughts travel to several antitheses for advice and input.  Jewish, Amish, Catholic, liberal, and even polygamous cults “give light” to some troublesome passages of Scripture.  These sources she treats with thoughtfulness and understanding, while at the same time she thumbs her nose at traditional fundamentalism (which she caricatures).  At the end of each chapter she discovers some new synthesis, and it’s only then that she learns to control some ungodly impluse or to actually enjoy domestic pursuits.  A good article on why Hegel’s dialectic is unbiblical see this article, “Compromise is Always a Synthesis” by Rick Shrader.  And the more our culture pursues this way of thinking, the more alien we will seem as traditional fundamentalists.

Lastly, Rachel Evans is a liberated woman and holds to all of the typical feminist ideals.  In her view, “women aren’t the problem; women are the answer.”  And while she claims to have done much research and to have read the Bible through, she admits “Precision has never been my strong suit” (chapter 4).  Apparently not in sewing and not in Biblical interpretation as well.  A bedrock principle she claims is that men are never given positional headship over women in the Bible.  In her view, the Fall of Man in Genesis 3 resulted in a corruption of equality between the sexes, that “hierarchy enters the human relationship as part of the curse, and begins with man’s oppression of women – ‘your desire will be for your husband, and he will rule over you’.”  Of course, she forgets that the reason for male headship is because they were created this way, and not as part of the curse (1 Cor. 11:8-9).  Evans (and her husband) look with skepticism and disdain on a man’s “trump card” of authority by pointing out servant leadership principles.  She says, “With Christ, hierarchal relationships are exposed for the sham that they are, as the last are made first, the first are made last…Women should not have to pry equality from the grip of Christian men.  It should be surrendered willingly, with the humility and love of Jesus” as she goes on to point to Christ’s emptying of Himself for man.  With a sigh, I’m responding in my head to her flawed logic, “Yes, but remember the end of the kenosis passage (Phil. 2:5-11) that Jesus Christ still has a trump card (Rom. 14:11).”