Neither Complementarian Nor Egalitarian

A Kingdom Corrective to the Evangelical Gender Debate 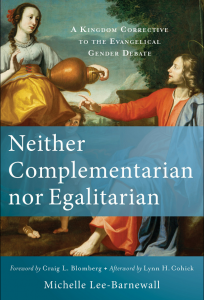 Of all the books about this topic I’ve read, this one is the most unique.  That’s my nice way of getting to what I really think:   I can’t stand what she has done.

If I’m reading her conclusion right, Lee-Barnwell ends up on the complementarian side with criticism only in the sense that we argue too much for the authority rather than servant leadership.  We talk too much about authority and power, she says.  That may be a fair criticism, and I have seen the abuse of power in churches and homes to be sure. Some have tried to coin a term, “patro-centrism” to describe that error….but I think it is not a fair criticism overall. Godly men are not lording their authority, they are withstanding not only the feminist tide, but human nature itself! She wants to say that in this debate, there is great misunderstanding about what godly leadership is, and there is great misunderstanding of what biblical submission is. For instance, when she says men are not really to exercise their worldly rights, but rather should sacrifice themselves as Christ did, I say, yes.  All of the godly men I know do this.

Here’s how the discussion goes in my mind. It is just like I’ve seen with the world criticizing too much emphasis on spanking.  They say, “you shouldn’t spank.  It’s child abuse, or it teaches kids to hit.”  We say, “no you’re wrong,” with a whole big discussion about the biblical basis for it and how it applies, etc.  They say, “OK, but you shouldn’t focus on it so much!”  Same thing here.  So if the debate eventually grudgingly resolves among Bible believers that complementarians are right, the response from this author becomes, “Yeah, but you shouldn’t fight for authority and hierarchy so much as love and serving one another! ”  My response is that we’ve been doing that all along.  Our focus on it was because YOU focused on it.”  (Chapter 5&6)

Also, I disagree that unity is the main point of the marriage and of the church.  Glorifying God is the main point.  This involves obedience to God’s way in all things including fulfilling our roles.  Unity is a byproduct, an indicator of how we’re doing in the main thing.  If a couple is striving for unity as a goal, then that could mean any number of arrangements.  They could be unified around falsity!  No, truth must win out.  That’s why in the Millennial Kingdom even the horses will be labeled “Holiness to the Lord” not “Look how we all get along!”.

Her criticism of complementarianism is replete with descriptions of abuse or misuse of authority.  So aggravating.

I get aggravated at these kinds of attempts to make a buffer between hard lines of distinctions.  She is so reluctant to admit that there is a hard line between complementarianism and egalitarianism. There are many issues in Scripture that force you to take a side.   We are either for Christ or against Him, the default of human nature being against.  There is sin, and there is not sin.  Gray areas actually don’t exist in God’s mind.  (See my article.)  In theology we either fall on the side of Calvinist (that salvation is a work of God) or on the side of Arminian (that salvation is a work of man)  even with all of the nuances and distances from that central dividing line, there’s really no middle ground on that point.  This is why I am for denominational labels.  Drawing lines of definition is useful in these matters.

I see gender roles in black & white, also.  Either there is a hierarchy of male leadership ordained by God or there isn’t.  Either women have a subordinate helper role, or we don’t.  HOW they both lead and follow is up for debate, but there is no neutral zone between the two camps. Redefining the terms here is akin to dropping denominational names in my opinion.  You just confuse us all and cause MORE debate, not less.

If she is simply saying that all involved should keep our motivations in check and not be so defensive, then I just wasted my time and money on this book!  Aren’t we all trying to get at the truth so that we can point out the corruption of that truth?  She just wants us all to stop fighting about it. Wayne Grudem answers this claim.

If we allow different views and practices on this issue to exist in the church, we are essentially admitting that both views are right. But that is all egalitarians want–at least until they attain majority control, and then the complementarian view is not allowed. …

When people say we should ‘stop fighting,’ it implies that complementarians are doing something wrong when we criticize egalitarians. But people who promote false doctrine will always say, “Let’s stop fighting about this topic,” because they want to stop the criticism….

Someone could object that complementarians eventually exclude egalitarians from influence in their churches. This does happen eventually, but often after a long period of allowing different views to be studied and taught. This is probably inevitable because the two views are mutually exclusive and only one side’s position can be implemented (either a church has women [pastors] or it does not.)

And I’ll say this as a woman…isn’t it just like a woman to want to have it both ways?