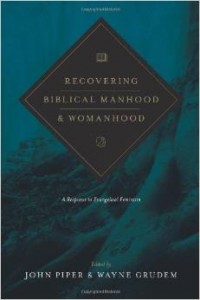 At the heart of mature masculinity is a sense of benevolent responsibility to lead, provide for, and protect women in ways appropriate to a man’s differing relationships.  At the heart of mature femininity is a freeing disposition to affirm, receive, and nurture strength and leadership from worthy men in ways appropriate to a woman’s differing relationships.

This is the main premise and definition of the book.  Excellent!  It is a much needed comprehensive book outlining the nature and roles of men and women from a Biblical perspective.  Be warned that it is not light reading.  The book begins by examining all controversial Scripture passages, not just some, in a scholarly and detailed fashion including Genesis 1-3, 1 Corinthians 11:2-16; 14:33-36; Galatians 3:28; Ephesians 5:21-33; Colossians 3:18-19; 1 Timothy 3:11-15; 1 Peter 3:1-7 and others.  Those chapters were helpful, educational and encouraging.

I enjoyed the exercises in textual criticism as well, though many may cringe at the tediousness.  For those who seek to find extra-biblical basis for sexual role distinctions, the chapters on sociological and biological studies will be very interesting and thought-provoking. A chapter on legal ramifications is included as well.  Every conceivable facet of the debate is carefully examined and answered.

I loved the Forward by John Piper, “For Single Men and Women (and the rest of us).”  So often these discussions of men’s and women’s roles is dismissed as something only pertaining to married people.  Often I’ve seen single men and women act in such a way that undermines their own God-given roles and the authority figures God has placed over them.  This negligence can cause huge problems in the churches where they attend or in their extended family and friendship relationships.  Scripture is relevant to all men and women no matter their marital status.  Yet the author addresses single men and women in a compassionate way, and I like what is said right off the bat,

Because married people were all single once, they tend to think that they know all there is to know about singleness.  I suggest this is not so; that there is a vast difference between being single at 25 or 30, with marriage still a viable possibility, and being single at 45 or 50 or 60, with little or no prospect of ever being anything else.  Singleness has a cumulative effect on the human spirit which is entirely different at 50 than at 30.

I agree with my brother who labeled modern feminism as one of the most aggravating of the liberation theologies.  In their thinking, since all of human history is a conspiracy against women, one must never trust any author past, present, or future who disagrees with them!  Almost as aggravating is much of modern Christianity which tries to answer the feminist claims with an incomplete philosophy of Manhood and Womanhood.  This book was written in contrast to the Danvers Statement which is shown to be a wholly inadequate and compromising answer to modern feminism.  The authors sought to publish a book that “represents a critical sifting of tradition, a rejection of all that is not Biblical, and a preserving of all that is.”

The only downside for me is that I wish at least one fundamental dispensational Baptist would have been included in the authorship.  The Council on Biblical Manhood and Womanhood is  one of the more theologically conservative groups in comparison to most of Christendom, but yet is not fundamental nor dispensational per se.  For instance, John Piper’s reformed theology does come through in subtle ways, but I can tolerate that since the subject at hand was not impacted by the authors’ views.  I still loved the book.

While this book may not be a good choice for a group Bible study, it ought to be an essential part of any pastor or pastor’s wife’s library.