The Role of Women in the Church 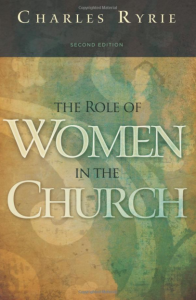 My book shelf is quickly filling with books from the complementarian point of view of women’s roles, and Ryrie’s book is a great addition.  He showed the great worth and dignity that Christianity has given women.  The first edition was written in 1979, and this second edition was published in 2011.  Some parts of the book took a bit of slow reading without distraction, but it was well worth the time!

Ryrie’s book begins with descriptions of the status of women in Judaism and in Greek and Roman culture and outlines how that differs from Christ’s teaching and relationship with women as well as the early church’s view of women’s roles.  Jesus’ ministry was truly a turning point in the life of women.  “It was the Lord Himself, who turned the reproach of the unmarried or widowed Jewish woman into reputable service for the Master.”  I appreciated in this section Dr. Ryrie’s explanation of the issues of divorce, silence in the church, head coverings, subordination, prophetesses and deaconesses, widows, and virgins.  His interpretations of the relevant Scriptures are true to the languages and the common sense of the texts.

The second half of the book traced all of the mentions of women in all of the church writings from the time of the apostles through the 3rd century.  This was different that most other books of this genre I’ve read, and I loved it!  The writings of Polycarp, Ignatius, Clement, Tertullian, Origen and others are analysed for clues about how the early church viewed women’s roles and how they applied the New Testament to the faithful Christian life.  Ryrie’s short overview of each writer’s theology and background was helpful because unlike Scripture, the writings of the early church are jaded by their own human fallibility and philosophies and false doctrines.  Having that framework for each writer was helpful to me in that way.  The writings reveal how the early church practiced the doctrines of the New Testament and interestingly an office of deaconess is conspicuously absent until halfway through the 3rd century. Rather, “Beyond any question the widow was the outstanding figure throughout the entire first three centuries of the church.”  We find the term deaconess  only in connection with Phoebe (Rom. 16:1-2) in the New Testament, and Ryrie shows clearly that even in the first centuries of the church, the office of “deaconess” is more of an outgrowth of a well-organized and respected group of widows whose duties were not liturgical but consistent with helping at baptisms of women and visiting the sick and prayer.  They did not preach, teach, nor perform any of the ordinances, not even when it involved only women.  Notably in these early church writings, widows were not ordained as were bishops/pastors.  Throughout these centuries the role of women in the home was the main emphasis of the church.   The value of these godly women and their active service in the church was undeniably treasured, but their service was never authoritarian or in conflict with male leadership.  Ryrie concludes, “Women workers, yes; women deacons, no.”

Too often the feminist and egalitarian camps try to rewrite church history and read into words like deaconess much more than was intended or described.  We need more voices like Ryrie’s speaking in support of the complementarian view of women’s roles, that subordination does not equal inferiority, that ordering of authority and roles is very much defined and expected in Scripture, and that a woman’s godly service and contribution to the church does not require a formal position of authority.