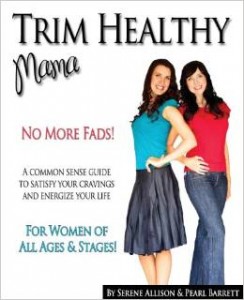 Serene Allison & Pearl Barrett have become an almost overnight sensation with their system of dieting.   It consists of organizing your foods into two meal types.  S-meals are the Satisfying no-carb, but relatively higher fat meals.  E-meals are Energizing, low-fat but low-carb meals as well.  The idea is to obtain energy from either fat or carbs, but never from both which would spike insulin levels and lead to energy storage as fat.  Beyond that basic premise, there are numerous other twists and turns to their system.  The big emphasis is the importance of keeping insulin levels low to prevent energy from storing on us in the form of fat.  Many women across the country have found good success with this diet.

For me, though, the down side was that I still had to count carbs, and I tended to load up on fats.  That’s because the diet has you focusing so much on controlling the carbs, not so much the fats.  It’s not until you get half-way through the book that you find out that you really should keep a tight reign on the fats and calories as well.  They kept saying it’s easy, but really it’s quite a lot to keep track of.

I asked my mother-in-law about the science behind carbs and insulin because she’s Type I diabetic.  She says that is true that if your body loads up on carbs but doesn’t use the energy, it will store it as fat.  So the low-carb (not no-carb) approach that the book recommends is sound.  Their system of keeping track of all that is probably a good way to diet.

Even though the book is a hefty 607 pages, it was actually pretty easy to read.  The sisters used a conversation-type writing style, including sisterly bantering as well as encouragement.  I appreciated that this system is something they worked out themselves and simply desired to share it with others.

Their Christian worldview is refreshing.  It is right of them to point out that if God mentions all food groups in the Bible in positive ways, then He must not have meant for us to eliminate whole food groups from our diets.  God would not have told us to enjoy something that He knew was bad for us.  From those thoughts come their debunking of raw diets, Paleo diets, vegan diets, and the like.

I’m usually annoyed with the overuse of words like POISON and TOXIC and SUPER FOODS and FRANKENFOODS. Just like man-made global warming is now being proven false, I think the organic/clean living fad will be refuted in years to come. The claims just don’t square with the scientific evidence. Serene is a food purist, and Pearl is not so much.  Although they repeatedly assure us that the diet will work if you don’t buy into the organic / all-natural / pure food mentality, there is a big push to avoid “poisoning” your body with Serene’s unapproved foods.  Pearl’s “lighten up” attitude toward her sister leaves little to be desired from the other side of the debate.  Science isn’t completely inerrant, but we’ve come a long way.  I would just caution anyone to do some research before swallowing those concepts whole-heartedly.

I don’t know much about hormones or vitamins, but there are several chapters about that.  That part seems all good information, but I wouldn’t know.  They cite no sources for their claims, and I felt bombarded by the sheer volume of info.  I guess it is supposed to lend credibility, but to me it is inadequate. On the other hand, the more one reads in a subject the better one grasps the whole picture from the whole body of evidence.

Some Biblical concepts out of context

Wine:  Being one who abstains from alcoholic beverages completely, I would advise ignoring the end of chapter 15.  In this chapter on beverages, they do endorse drinking wine and low-carb alcoholic drinks in moderation.  Their defense is stated this way, “Jesus performed miracles with it and wine was definitely a biblical beverage.  This was not grape juice as some like to argue.  Fermentation played an integral role in enabling populations to have enough to eat and drink that today as there was no refrigeration”  (pg. 167).  In reality the term “wine” in the Bible had two definitions, one was grape juice, “the fruit of the vine” and one was fermented, “strong drink”  (See “Bible Wine” by Rick Shrader).  Serene smilingly enjoys her “food zealotry”, but it seems odd to be so adamant about specific foods yet generous with the definition of wine.

Old Testament Dietary Laws:  Serene & Pearl freely admit that their adherence to the Old Testament dietary laws are purely their preference.  But they do put the concept there in the book on page 54.  Suffice it to say here that while the Bible does prohibit certain foods in the Old Testament, that was in a different dispensation.  Let’s remember that at the beginning of our Dispensation of Grace (or the Church Age) God told Peter directly to “Kill and eat…What God hath cleansed, that call not thou common”  (Acts 10:9-18).  The dietary laws are not in effect today for the believer just as there are no longer any unclean people groups either.  The purpose of the Mosaic dietary laws (and cleansing laws for that matter) were a part of the ritual that separated them from the pagan culture around them, and it was also a God-given set of sanitary procedures.  Today, we have other ways to ensure food safety even in foods like pork.

Interestingly, Serene and Pearl are the daughters of Nancy Campbell who wrote Be Fruitful and Multiply, a mainstay book in the Quiverfull movement.   Campbell is the founder / editor of “Above Rubies”.    While I appreciate the generally encouraging writings promoting traditional family, the blessing of children, stay-at-home moms, and biblical gender roles, I can never bring myself to endorse her magazine whole-heartedly.  Her basic error is that she’s not dispensational in her Bible interpretation.  Just about all of her premises lie in Old Testament mandates to the nation of Israel.  That book and the Trim Healthy Mama book put much weight into gaining blessings here on earth….with family, land, health etc.  One interesting inconsistency, for example, is that Nancy Campbell decries any artificial, “unnatural” control over the beginnings of life…including the sperm and the egg before conception.  Yet her daughters, Serene and Pearl, in Trim Healthy Mama fully embrace hormone therapy for men and women toward the end of child-bearing years in order to prolong those years and delay the aging process.  This all stems from their view that our primary purpose on earth is to give birth to and rear godly offspring.

A little too personal for comfort

There are several chapters dealing with sex between husbands and wives.  Much of it is pretty private and embarrassing.  A good sexual relationship within marriage is healthy to be sure, but it is not material for a diet book in my mind.  However, they include it because I think their focus is a holistic concept of health.  I wouldn’t let anyone unmarried read those sections.

Overall, I view this diet like I did the Weigh Down Diet from a couple decades ago.  Good diet, but it would have been fine to leave God out of it. On the other hand, not being dispensational is not the same as being heretical.  So if you want to try something different, I say go for it if you wish.  I’m going to try a different diet.