Scroll to Top
Categorized as
3763
Tagged as
DoctrinesubmissionWomen's Ministry
Related 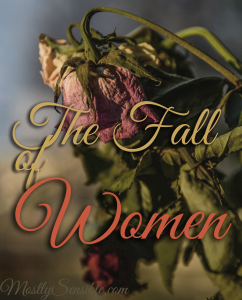 In my previous post “God Created a Woman”, we reviewed the nature and purpose of women as we studied through Genesis 1 and 2.  I’ve made the point that God created women to be equal in kind to the man, and His purpose for us is to be helpers to the man.  This arrangement, this role, this hierarchy, is a part of God’s perfect creation.  Sin had not entered the picture yet.  Complimentarianism seems to be the only form of male headship that embraces this belief. Many views of womanhood (feminism, Islam, Mormonism, many cults, patrocentrism, egalitarianism) believe that the curse on the woman after the Fall resulted in woman’s subordination to man, and so they have to make the sinless creation to be without hierarchy.  In these views, if the Fall resulted in subordination, then redemption is a restoration of equality of the sexes.   I hope I’ve been able to bring some clarity and truth to the discussion.

The answers are all in Genesis 1 and 2.   We saw that men are given a leadership role simply by virtue of being a man.  The first woman’s role was to be a helper on par with the man, a complement to him, and this is by virtue of simply being a woman.  God did it this way on purpose and in His wisdom.  When these roles are performed correctly and harmoniously, the original glory of God’s very good creation is re-created and re-invigorated.  And conversely, when the roles are abused or neglected or distorted, the nobility of God’s purpose in us is hindered.

Why is it so difficult?

Then comes Genesis 3.  We do need to look at the reason why it is so difficult for us to fulfill God’s role for us.  If we were made for this reason, then why is it so hard?

Scripture does give us negative examples of women who were not reflections of God’s original intent for women:  Jezebel, Rebekah, the women of Corinth, Herodias, Delilah, etc.  These negative examples can give us some valuable insight into the pitfalls of womanhood.  But it all originates with Genesis 3 and the Fall of the first man and woman.  If we were to take Genesis 3 out of the Scripture, the Bible would not make sense.  Throughout the creation chapters, we get some subtle hints at the hierarchy of creation:  God, then Man, then Woman, then animals and nature.

I encourage you to read Genesis 3.  Here we see very clearly that something is amiss from the very first words out of the serpent’s mouth.  Satan’s first deception and attack is directed against this headship by going to the woman, not the man, to change the direction of their obedience away from God to their own desires.

The story is familiar.  Satan reinterprets God’s design of the beautiful new world and its inhabitants.  He twists the graciousness and wisdom of God into an unfair plot meant to restrain and frustrate the man and woman from their full potential.  The consequences of the sin are conveniently weakened.  This sovereign design God created to give both the man and woman purpose and fulfillment now makes it seem to Eve like God is the rival and Satan is the liberator. Ray Ortland describes it eloquently,

It was a lie big enough to reinterpret all of life and attractive enough to redirect Eve’s loyalty from God to Self.  The lie told her that obedience is a suicidal plunge, that humility is demeaning, and that service is servility.  And so Eve begins to feel the aggravation of an injustice which, in reality, does not exist.2

Adam, of course, was there the whole time.  He was quietly letting all of this exchange happen.  He never steps in to protect her from the Deceiver.  Ortlund continues his description of the original sin:

Mark well what the text says and what it does not say.  The text does not say, “… she took some and ate it.  Her husband, who was with her, also took some and ate it.”  What actually happened is full of meaning.  Eve usurped Adam’s headship and led the way into sin.  And Adam, who (it seems) had stood by passively, allowing the deception to progress without decisive intervention – Adam, for his part, abandoned his post as head.  Eve was deceived; Adam forsook his responsibility.  Both were wrong and together they pulled the human race down into sin and death.

Isn’t it striking that we fell upon an occasion of sex role reversal?  Are we to repeat this confusion forever?  Are we to institutionalize it in evangelicalism in the name of the God who condemned it in the beginning?3

Whose Fault Was It?

It must be noted that hierarchy is again hinted at when the couple’s eyes were opened to their nakedness only after Adam ate of the fruit.  Why not after Eve took the first bite?  Because Adam was the God-appointed head who was responsible for them both.  This is also the reason why God called out to Adam in Genesis 3:9 to ask, “Where art thou?”  He didn’t call out to Eve, or to both Adam and Eve.  God levels his compassionate and sad condemnation at Adam’s sin.  It was in Adam that we sinned (1 Corinthians 15:22).  Scripture is clear.  We didn’t all sin “in Eve”.  No, Adam was the head of our human race.  We can speculate what might have happened if Adam had refused her, leaving only one sinner in the Garden.  But what we do know is that the whole human race was condemned to bearing the sinful nature because of Adam’s sin, not necessarily Eve’s, although she was just as guilty.  “Wherefore, as by one man sin entered into the world, and death by sin; and so death passed upon all men” (Romans 5:12).

As the blame game commences, each offender tries to back out of their own responsibility in the sin.  God gives the man, the woman, and the serpent punishment for their sin.  The earth/creation passively receives consequences for man’s sin.

God puts the hierarchy back together in its proper order in Genesis 3:14-19.  When God gives Eve her two-fold punishment, her two relationships are marred.  The first new element in her experience effects her role as a mother: pain in childbirth.  That act that only women can do is now impaired, and it’s full joy is lessened.  The second part of her punishment involves the relationship with her husband.  The phrase “thy desire shall be to thy husband” has a striking similarity to Cain’s judgment in Genesis 4:7 where sin has a “desire” for Cain, and Cain is told he must rule over it.  So we can infer that this “desire toward her husband” is a desire to have her way with him.4

God gives the woman up to a desire to have her way with her husband.  Because she usurped his headship in the temptation, God hands her over to the misery of competition with her rightful head.  This is justice, a measure-for-measure response to her sin.5

The last part of Genesis 3:16 has been the subject of much controversy.  The phrase “and he will rule over you” can be taken in a couple of ways.

I lean toward the first option as the most likely.  In either case, woman now is given over to the misery of combating her own tendency to usurp a man’s headship.  And in both cases, the answer is not for domineering rulership nor liberation from her situation altogether.  Rather, the solution to the strife is godly headship and willing service as a helpmeet, bringing both the woman and the man back to God’s original purpose for both.

Since the leader / follower relationship is not the source of struggle between the sexes, what is the root cause of such things as abusiveness, servility, domination and other ugliness then?  Sin.  Nothing more.  Nothing less.

What sort of world might it have been if Eve had refused the Serpent’s offer and had said to him instead, “Let me not be like God.  Let me be what I was made to be — let me be a woman”?  But the sin was fatal beyond their worst imaginings.  It was hubris, a lifting up of the soul in defiance of God, the pride that usurps another’s place.  It is a damnable kind of pride.6

This tendency toward insubordination is now a problem for all women everywhere.  This is our struggle.  We struggle to submit to God’s plan for us.  We kick and fight and pout to get out from under anyone!  It is that desire in us that is a special punishment for Eve’s sin.  But like all sin, it can be overcome.  For the Christian, we never have to sin.  We can continually set our minds above (Col. 3:2).  We can put off the old nature and put on righteousness and gain mastery over it as much as possible in this life (Eph. 4:22-32).  God will be with us all the way (Romans 8).  Ultimately, when the end of the ages comes and the curse is lifted, maintaining that “very good” relationship will not be a struggle anymore.  Even at that point of perfection, we will still be serving, and there will still be a hierarchy (Rev. 22:3).  Creation will not be redefined, it will be restored.  “Even so, Come, Lord Jesus”  (Rev. 22:20).